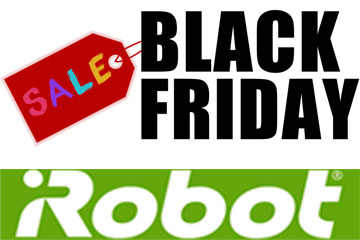 Are you looking for the Best Roomba Black Friday Deals?

We have scratched the markets, and below, we have a list of all the Roomba deals and discounts for Black Friday 2019. But just before that, here is an overview of the event.

The 2019 Black Friday is scheduled for November 29, the day after Thanksgiving, as is the norm. On the other hand, Cyber Monday will be coming on December 2 and will feature several smart robot vacuums.

You might have saved for a while to get yourself a Roomba. If you’re ready to get one now, we advise you to be a little patient and wait for Sales day.

If you want the best robot vacuum deals and discounts, this is the year’s biggest sale.

Over the years, homeowners have taken advantage of this sale. While the end of November seems so far, there’s some good news.

Most of the retailers are planning for early deals because this year’s sale comes at the end of the month. Usually, it comes slightly after mid-month, so to compensate for the shorter shopping window, expect deals as from November 20.

If you are on a budget, all your eyes should be fixed on the 614, the cheapest iRobot vacuum.

It was still the cheapest Roomba during last year’s Black Friday. At the moment, it costs around $220 and come next month, the price should go down further.

Last year, its retail price was around $280, and it sold for almost 40% off during Black Friday and Cyber Monday. But is it a worthy buy?

This is another budget robot vacuum from iRobot.

It was also among the cheapest Roombas last Black Friday, and in the upcoming sale, it should also feature.

Last year, it sold at a 30% discount and this year, expect huge savings as well.

But considering it’s an old model, there will be limited stocks.

But in case you find enticing Roomba 690 deals, should you snap it?

Well, the 690 is not so different from the Roomba 614 only that it is connected.

This is a pretty new model in the iRobot 600 series. Last year, it was among the best selling Roombas as it had a $300 price tag and attracted a 30% discount.

But the big question is, should you buy this model?

Except for the aesthetics and finishing, the 675 is exactly the same as the 690 in terms of features and performance.

This is another fairly new robot vacuum from the California brand. Released last year, customers saved $100 on the E5 during Black Friday.

The recommended price at the time was $350, and it sold for $249 though there was limited stock.

This year, iRobot is expected to offer the same deals as last year’s Black Friday.

The Roomba E5 is a great vacuum considering it takes a step further from the 600 series and brushes shoulders with mid-tier models like the iRobot 890.

It’s highly unlikely we’ll be seeing Roomba 980 deals. Instead, you can find some fantastic discounts on the 960.

Now, should you buy it or not?

The two were fresh during last year’s sale, but unfortunately, the deals were not so generous.

There were limited discounts on Roomba i7, but this year, expect some good deals now that the S9 is also available.

The S9 is the latest Roomba vacuum.

Well, there will be discounts but don’t expect the best Roomba in the market to offer big discounts, just the way the i7 did last year.

This is one of the most expensive robot vacuums, but then, it’s worth every penny.

The new S9+ is the true successor of the iRobot 980. It capitalizes on the mistakes of the Roomba i7.

There you have it folks, all the best Roomba deals, and discounts this Black Friday. Make sure to subscribe to our price drop alerts, and we’ll keep you updated when there are discounts.

And it’s not just Roombas; there will also be Braava deals for those who want a robot mop.

If you want a robot mop, then look out for Braava 380 discounts, which will definitely be plenty.

Last year, this was the best iRobot mop, overshadowing the earlier Braava 240.

Now, the Braava 380 will be a great model for those on a budget.

Otherwise, it’s not the best that money can buy.

It can, however, handle the small to medium-sized apartments efficiently, but with a newer model on the market, why not try the new Braava?

This is the latest robot mop from iRobot and costs quite a fortune. As a new model, don’t expect big discounts.

It will probably have a 10 – 15% discount now that it is making its Black Friday debut.

The Braava M6 is the ultimate robot mop and has been designed to sync with the new Roomba S9+.

As the Roomba sweeps and vacuums, it follows behind, wiping the floors.

The M6 is smarter in all ways compared to the Braava 380t, so it should be number one on your wishlist this Black Friday.

Now, one thing about Black Friday is that the deals are always limited. While crazy discounts will be promised, there will be minimal stock, so this is a sale even for the fast fingers.

In this segment, we have shared tips on how to find the best Roomba deals.

That’s it for today. As we said, we will be updating this page, so make sure to keep it right here.
You can also check out our other Black Friday robot vacuum deals.

I am a tech enthusiast with a flair for home robotics and Smart Home technology. If I’m not in my office, you will find me testing gadgets and writing reviews. I also like fishing and mountaineering. When I was buying my first robot cleaner, I had a hard time making a choice on what to go for because there was very little information about them. For that reason, I decided to start this blog to help other customers choose the best Home Gadgets.
🥇 Top 5 Best Robot Vacuum Cleaners Under $200 Dyson Black Friday Deals and Sales 2019