This Roborock E4 vs. E5 comparison is suitable for those wondering which of the two models is the best deal in terms of price and features.

The E4 and E5 are two entry-level robot vacuums from Roborock. They are almost priced the same though the newer E5 is a little bit more expensive. They also have similar features, but ultimately, there is a difference between the E5 and the E4.

The Roborock E5 is a newer model that is more powerful than the Roborock E4 and comes with the MagBase™ remote control. Another difference is in the available colors and the Real-Time Robot Location feature.

To find out more about these two robot vacuums, read along.

As mentioned above, the Roborock E4 and E5 are entry-level Roborocks that share plenty of features, but there are profound differences. Before going into the details, here is an overview of the two models.


The Roborock E4 was released in April 2020 and came to replace the E3. For the record, there are two variants of the E4: Roborock E4 and Roborock E4 Mop. So, what’s the difference?

The Roborock E4 is a vacuum with an optional mop. It doesn’t come with mopping accessories (SnapMop system), but they can be bought separately. On the other hand, the Roborock E4 Mop is a 2-in-1 cleaner with all accessories needed for mopping.

The Roborock E4 is ideal for small to medium-sized apartments with bare floors, low to medium-pile carpets, and pets.


Released in 2021, the Roborock E5 is the successor of the E4, and even though there are many similarities, this one is ultimately an upgrade. Here again, there are two variants: Roborock E5 and Roborock E5 Mop.

Just like the E4, the E5 series is ideal for homes with bare floors and pets. When it comes to carpets, this is the ultimate deal as it handles all carpets, from low to high pile carpets and area rugs. 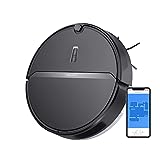 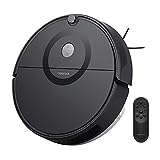 The Roborock E4 and E5 are very similar when it comes to design. The two are both round-shaped robot vacuums, and the dimensions are also the same. The duo has a 13.78-inch diameter and stands at 3.56-inches. This low-profile design allows them to go under most low-profile furniture such as sofas and kickstands.

The only difference between the two robot vacuums is that the E4 is available in black only, but with the E5, you can take the black model or the white one. There’s also a difference in the design of the two interfaces, but that’s not important as they both feature two buttons: POWER and HOME buttons.

The biggest difference between the Roborock E4 vs. the E5 is the vacuuming performance. They both use a 3-stage cleaning system where dirt is agitated, lifted, and sucked into the bin. But then, the suction power varies.

How the Suction Compares

The Roomba E4 comes with a powerful motor that delivers 2,000pa when in the highest power mode.

On the other hand, the E5 has been engineered with a powerful motor that offers a 38% boost in HyperForce™ suction, delivering a whopping 2,500pa.

Just to mention, the two have Automatic Carpet Boost that adjusts suction to a higher level when carpets are detected.

Many readers have been asking us, what is the difference between Roborock Max and Turbo mode? Max mode is for vacuuming carpets and heavy debris, while Turbo is the most potent mode for deep carpet vacuuming.

How the Brush Systems Compare

While there is a difference in suction power, the two robot vacuums maintain the same brush system.

The main brush is a bristled spiral brush that does a great job scrubbing stuck-on dirt and picking up all sorts of debris, from pet hair to sugar and Cheerios. It is complemented by a single side sweeping brush that reaches the deep corners and wall edges, though not satisfactorily as a D-shaped robot vacuum like the Roomba S9 or Neato.

We tested the vacuuming performance of these two robot vacuums, and yes, there was a difference. Below is an illustration of the results.

Another similarity between these two robot vacuums is the filtration and dustbin.

The Roborock E4 and E5 come with 640Ml dustbins that need to be emptied often to ensure the robot delivers peak performance. For easy maintenance, the dustbins are washable.

Another talking point is filtration. The two vacuums come with washable E11 air filters that need to be cleaned at least once a month and replaced after four months to ensure the robot offers optimal cleaning.

The Roborock E4 and E5 both have mopping features, and the performance is the same across the board. One thing about these two is that they don’t offer the same level of mopping performance as the high-end models, talk of the S6 and the S7.

When it comes to the mopping components, there is no difference. The two Roborocks come with 180Ml gravity tanks, which are less efficient when it comes to water usage when compared to Roborock electric tanks that are included in high-end models. Here, expect them to dispense excess water and, in the end, will leave some areas wet. But all the same, they get the job done. The two can mop over 1600 sqft with a single fill.

To scrub the floors, the two Roborocks use a microfiber pad that scrubs and wipes stains and grime quite satisfactorily. But then, it gets overwhelmed when mopping the tough stains. As a result, it can’t deliver the same mopping performance and convenience as the high-end models.

We tested the mopping performance of the two robot vacuums. Below are the results

How Do the Battery and Runtime Compare?

One of the striking resemblances of these two robot vacuums is the battery performance. They have the same battery, and consequently, they can clean the same area on a single charge.

Under the hood, the Roborock E4 and E5 pack a 5,200mAh lithium-ion battery, the same one you find in the high-end models such as the Roborock S5, S6, and S7, as well as their variants. Regarding the runtime, they both offer 200 minutes in Quiet Mode and an average of 90-100 minutes in Max mode. On a single charge, both vacuums can do 200㎡.

When it comes to power management, these two robots are intelligent enough to dock and recharge automatically. They take 2-3 hours to recharge but unfortunately, the E4 and E5 don’t resume cleaning automatically. However, they come with Top Up Charge that allows the robots to quickly recharge to 80% and complete the job. The robot records where it has reached in the cleaning, recharges, and then continues cleaning from where it left off.

How Do They Navigate?

Unlike the high-end robot vacuums, the E4 and E5 rely on Inertial Navigation engineered with dual gyroscopes, OpticEye, motion-tracking sensors, and retractable bumpers. These systems are critical in tracking the robot’s movements and identifying obstacles. While they may hit a few obstacles here and there, the bumper prevents accidents as it retracts when an object is hit, and then the robot changes direction.

Pro Tip: If you have a house with lots of traffic, consider removing some obstacles to make the robot’s work easier.

When it comes to maneuverability, the E4 and E5 rely on a set of large off-road wheels that can go just anywhere. The robots can transition from bare floors onto carpets with a 2cm (0.8in) threshold.

Do They Have Mapping Features?

The two robot vacuums have an intelligent system that can create the map of your home for logical cleaning patterns. Even though they are entry-level robot vacuums, they clean in a systematic pattern ensuring almost 100% coverage. During our tests, we realized the robots cover the entire house except around chair legs.

Unfortunately, the E4 and E5 can’t save multiple maps, so they are not suitable for homes with more than one floor.

When it comes to containment, it’s such a letdown that the two robots don’t support digital boundaries that allow users to draw the limits of the robot on the app. But at least the two work with magnetic strips that have to be purchased separately.

When it comes to smart features and convenience, the two robot vacuums share a lot, but there’s a slight difference.

One of the similarities is app operation. The duo comes with 2.4GHz WiFi for mobile app operation via the Xiaomi Home app. On the app, you can launch cleaning sessions, set cleaning schedules, choose suction levels, monitor cleaning progress in real-time, and review cleaning maps.

Currently, the Roborock E4 and E5 are compatible with the Mi Home app only; support for the Roborock Home app is not yet available.

Another similarity is the voice operation features. Both Roborock E4 and E5 have an inbuilt Voice Control feature that enables users to start or stop cleaning sessions using voice prompts. Another feature that cuts across the board is the Voice Pack that supports English, German, Spanish, French, and Chinese.

Lastly, the Roborock E4 and E5 are compatible with smart voice assistants such as Google’s Assistant and Amazon’s Alexa. In addition, both models support Over the Air (OTA) upgrades, so if Roborock adds a new feature or firmware, you can update your robot’s software hassle-free.

The remote control is the only difference between the Roborock E4 and E5 in terms of smart features and convenience. The new Roborock E5 comes with the MagBase™ remote that gives users a whole lot of convenience. The remote can control the robot’s direction, start or stop cleaning, start a Spot clean, etc.

Another difference is the Real-Time Robot Location feature. If you have a large apartment and don’t know where your robot is, the Roborock E5 allows you to see where it is in real-time via the app. This feature is not available on the E4.

There you have it, folks, a detailed comparison review of the Roborock E4 vs. Roborock E5.

There are so many differences between the Roborock E5 vs. E4. The E5 comes with much powerful suction, Real-Time Robot Location, and MagBase™ remote. These are exclusive extras that the E4 lacks.

That’s the end of this Roborock E4 vs. E5 comparison review. While the two vacuums share a lot, there are some differences. So which is the best bang for the buck? Well, the Roborock E5 is the best choice as it tags along with several extras.

Importantly, it offers better vacuuming compared to the E4, courtesy of the improved suction. So, ultimately, the Roborock E5 is the better deal!

I am a tech enthusiast with a flair for home robotics and Smart Home technology. If I’m not in my office, you will find me testing gadgets and writing reviews. I also like fishing and mountaineering. When I was buying my first robot cleaner, I had a hard time making a choice on what to go for because there was very little information about them. For that reason, I decided to start this blog to help other customers choose the best Home Gadgets.
How to Clean and Change Roomba Filters Shark Vacuum Troubleshooting Guide