If you are in the market for a mid-entry robot vacuum hybrid, then you have come to the right place! In this article, I’ll walk you through the differences between Eufy L35 vs. X8 hybrids. A little while back, Anker launched these two models. Read to learn if any of these robots fit your needs! 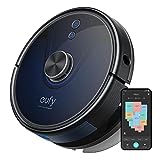 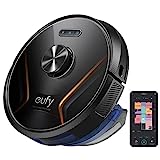 In this section, let’s find out how they compare in terms of features.

The overall design of Eufy L35 doesn’t differ much from other robot vacuums in the market; it is round and shallow. Immediately you can see the dome denoting it’s a robot vacuum with LiDAR. The LiDAR sensors are housed in a protective housing, so don’t worry about the robot damaging it when it hits something.

I’m not so sure what type of plastic the manufacturer uses, but it’s sturdy and shiny. I actually had mistaken it for metal until I gave it a gentle knock. The designers added some blue details to make the robot stand out a little, but I wish they didn’t.

Whether you choose white or black, the top of the X8 Hybrid will always have a pair of gold and black lines that angle in toward the silver Eufy logo in the center.

This model also uses the same plastic material with cutouts on the side where the IR sensors are.

Personally, I can’t say that I really like the aesthetics of these two robot vacuums. But at the end of the day, looks are not as important as the features my smart home appliances will bring to the table.

Both Eufies feature iPath Laser Navigation, a fancy term that Anker uses to describe their LiDAR system. LiDAR stands for light detection and ranging. The beauty of LiDAR is that the robots can work in low-light areas.

The only downside is that the robots might get confused when there are wide objects hanging low. The LiDAR system could mistake tablecloths and bed sheets for walls.

Notwithstanding that limitation, these robots generate accurate maps for up to three floors that are viewable via the app. You can save room layouts and create virtual boundaries there, as well. Given that the mapping is done, the robots know where they have been and where they need to go, including spaces you usually do not vacuum, such as nightstands and bedside tables.

While I doubt the robots will go close to anything, it is still advantageous that they have bumper sensors for tricky areas. As with any robot vacuum, these models detect walls and avoid deadly falls using infrared sensors.

Now, you might be wondering: what if I already have magnetic strips in place? The Eufy L35 and X8 will respect those boundaries.

To sum up, the Eufy L35 Hybrid and X8 Hybrid are equal in terms of navigation and mapping. Both models rely on iPath Laser Navigation as well as infrared and bumper sensors. The robots can build up to three maps of your home and they will stay away from no-go zones you set through the app. Likewise, these robots will stay away from areas marked off previously using magnetic strips.
These two are not the fastest robot vacuums out there. And due to the lack of a camera system and software to match, they do not respond to obstacles as quickly as I want them to. Another thing to be aware of is that they tend to wander around a little bit before they make their way back to their base.

The Eufy L35 Hybrid and X8 Hybrid have four levels of suction power at your disposal: Quiet, Standard, Turbo, and Max. If you aren’t sure which one to choose, enable BoostIQ so that the robot automatically cranks up its suction power when it encounters pet hair and carpets.

The most impressive technology built into the Eufy X8 Hybrid is its twin turbines that deliver 2,000 Pa of suction each. That said, this model generates a total of 4,000 Pa of suction power for better pick up of pet hair and ultra-fine fine debris.

Flipping the L35 Hybrid over, I found the brushroll between rubberized suspension wheels on either side. The cleaning head is a combination of rubber and thick bristles. But instead of a straight line, the bristles were zigzagged and broken into sections so that collected hair would not get wrapped around the rubber part of the main brush. The same can be said for the other model.

These Eufies only have one side brush, but here’s the kicker: there’s a little brush that spins underneath the side sweeper. This little touch of extra prevents dirt from getting stuck there.

The brushroll and side brush of these two models deliver so-so performances and they require weekly maintenance. When it comes to brushes, Roomba has definitely set the bar so high. Maybe that’s why I’m not gushing over these accessories. Regardless, I like that the cleaning tool can be attached to the dustbin inside the robot. You won’t run the risk of losing it.

As the name suggests, these two robots are hybrids. They come with a mopping plate that you snap into place on the underside of the robots. Getting the mop up and running is a breeze. But just like the majority of hybrids, these gizmos focus more on vacuuming than mopping.

The biggest complaint I have with these two models is that you have to delineate areas with carpets and rugs in the app, and this step is a bit of trial and error. Can you really determine where the rug under the coffee table begins and ends? What’s worse is that they don’t remember the no-mop zones you created, which means you will have to redraw them whenever you use the mop template.

I wish the mopping capabilities for these two hybrids were more robust and versatile, but they are far less impressive than hybrids like the Deebot X1 Plus. Believe me, you have a better chance of dampening your socks on a sunny day! But if you mostly have non-carpeted flooring, then any of these two might be enough to leave your bare floors with a squeaky clean sheen.

Both Eufies have a large dustbin capacity compared to the vast majority of robot vacuums. The dustbin for the L35 Hybrid has a volume of 330 ml, while the X8 Hybrid has 400 ml.

According to Eufy, the dustbin for the X8 Hybrid features UltraPack Dust Compression Technology, thus increasing utilization. Basically, dust is packed very tightly so that it doesn’t fly all over the place when you dispose of the contents.

The Eufy X8 is the winner in this department. Aside from the fact that its dustbin is bigger, it allows finer dust and lighter debris to get clustered in the center of the bin, while heavier crumbs are separated at the bottom.

However, you’re not really going to run into a dead robot because they are programmed to rush back to their bases when they are running low on juice. If any of these robots do run out of power in the middle of a cleaning session, it will return and pick up where it left off.

By taking a brief look at the robots, you can also check their current battery status. A pulsing blue indicates that the battery level is dropping to the point where it needs to charge. A flashing orange turns to a solid blue when it completes a full charge. If the robot flashes red, it means it encounters an error.

Both robots have the same charging time, but the Eufy X8 Hybrid has a longer battery life. This model also cleans faster than the other due to its stronger suction power generated by the twin turbines, thus it conserves battery more efficiently.

You will need to install the Eufy app to get the most out of the L35 Hybrid and X8 Hybrid. After the robots generate maps of your home, you can leave them to their own devices or override their choices.

There are many ways to use the robots using the app, such as instructing them to clean one area instead of the entire home. You can also adjust the suction power or switch to BoostIQ, a cleaning method in which the robots will increase their power depending on the debris and surface they are dealing with.
You may also integrate Amazon Alexa and Google Assistant skills, so you can start a clean with the power of your voice.

Both robots have the same charging time, but the Eufy X8 Hybrid has a longer battery life. This model also cleans faster than the other due to its stronger suction power generated by the twin turbines, thus it conserves battery more efficiently.

What’s In the Box?

Both models require little setup and after their initial charge of nearly five hours, they can immediately start vacuuming. As expected for the first session, both robots took their time learning every nook and cranny of my home.

Eufies took an hour to map 300 sqm of space, and most of those 10 minutes were spent analyzing how to get past intricate decorations and low-clearance furniture. There were occasions when they bump something against completely dark areas, but they both can maneuver around without my intervention.

To be fair and square when testing the robots, I made sure to clean my entertainment room first using my favorite Roborock S7 before I scattered 200 grams worth of debris. I used glitter, cheese powder, cotton balls, fuzzy yarn, popcorn, and crushed potato chips on three different surfaces. Then I run the two robots using BoostIQ.

Below is an illustration of the results.

The general debris collection for the two was decent, although I still saw something sparkling in the thick rugs. Some of the cheese powder melted on the bare floor and the mopping features for both robots failed to entirely wipe off the evidence. Regardless, both hybrids did a great job. The X8, in particular, finished faster, thus there was less melted cheese powder on the floor to clean.

The biggest difference between the Eufy L35 vs. X8 robot vacuum hybrids is the latter’s twin turbine system. Equipped with two powerful turbines, it is unlikely to get clogged by overwhelming amounts of pet hair and it maximizes suction power to clear up messes in a shorter amount of time.

However, I am not sold on the mopping capabilities of these two robot vacuums. The app is user-friendly, but it leaves a lot to be desired.

Personally, I would rather shell out more for a hybrid that can do both efficiently. But if you need a hybrid to maintain your abode’s cleanliness, any of these two robot vacuums will fit the bill. Some maintenance is required, but it is insignificant compared to the time you will save by not having to vacuum and mop your house daily.

Hi! I'm Swartzcop Kennedy, a young specialist in hi-tech devices and digital marketing. Kenya is my native country. In 2015, I graduated from the University of Nairobi, and keep living in this wonderful city for many years. After graduation, I tried myself in the IT and digital spheres working as a content and social media marketer, content analysis specialist, and customer relationship manager.
Tineco iFLOOR 3 vs. FLOOR ONE S3: Comparison Review