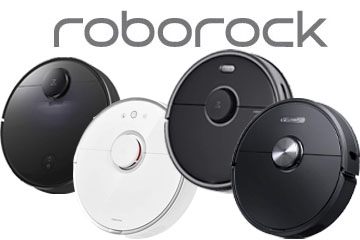 You will agree with me that Roborock is a force to reckon in the robot vacuum market. But then, settling on a particular model is the biggest challenge as the models are quite confusing.

In this Roborock S4 vs. S5 vs. S5 Max vs. S6 comparison review, we have told it like it is. Find out what are the similarities and differences, and most importantly, which is the best Roborock robot vacuum in 2020.

But just before that, here is an overview of the company, and the highlights of each model.

Roborock is a Chinese company that specializes in robot vacuums.

It is the company that manufactured the popular Xiaomi Mi vacuum and Xiaowa, under Xiaomi.

Later on, the company went solo and is now asserting itself in the market as a robot vacuum brand.

The Roborock S4 is the entry-level Roborock vacuum, released in September 2019.

Unlike Roborock S5 and the rest of the Roborock models, this one sweeps and vacuums only.

But then it is a worthy robot vacuum for homes with pets and carpets, besides the bare floors.

It also has most of the features the high-end models have. These include 2000pa suction power, smart connectivity, and a powerful battery among others.

The S5 was the flagship model and came to replace the Xiaomi Mi Vacuum.

One of the biggest features is the 2-in-1 cleaning, which integrates mopping function.

The Roborock S5 also had improved suction power, and before the coming of the Roomba S9, it was the most potent vacuum we had tested.

One of the areas the S6 improves on is the brush. The bristles are denser and offer better agitation and dirt pickup.

The S6 also has an updated processor and software which offers faster computation and improved algorithms for faster cleaning.

The S6 also has room recognition, Zone Cleaning and saves up to 3 maps.

Mopping function has also been improved in the S6, and now, homeowners can control water supply on the robot. There are two settings.

This is a pretty new model released in August 2019.

It is an upgrade of the S5 and brings on board several features that even the Roborock S6 lacks.

One major improvement is the mopping features. Besides the larger water tank, the biomimetic technology improves water management.

Now, you can control the water seepage right from the mobile app.

The Roborock S5 was impressive, but it had several flaws, and that called for the Roborock S5 Max, which is the latest model. While the S6 is on a higher series, the S5 Max is a worthy competitor.

Let’s find out which is the best model between the Roborock S5 Max vs. the S6.

The Roborock S4 is the only different model in this line of robot vacuums. While the S5, S5 Max, and S6 are 2-in-1 vacuum cleaners, the S4 tags along with the vacuuming function only.

But how do the features compare? That’s what we are about to find out in this section.

These Roborock vacuums use a 3-stage cleaning system in which the brushroll plays a critical role. We haven’t seen much change when it comes to brush technology. 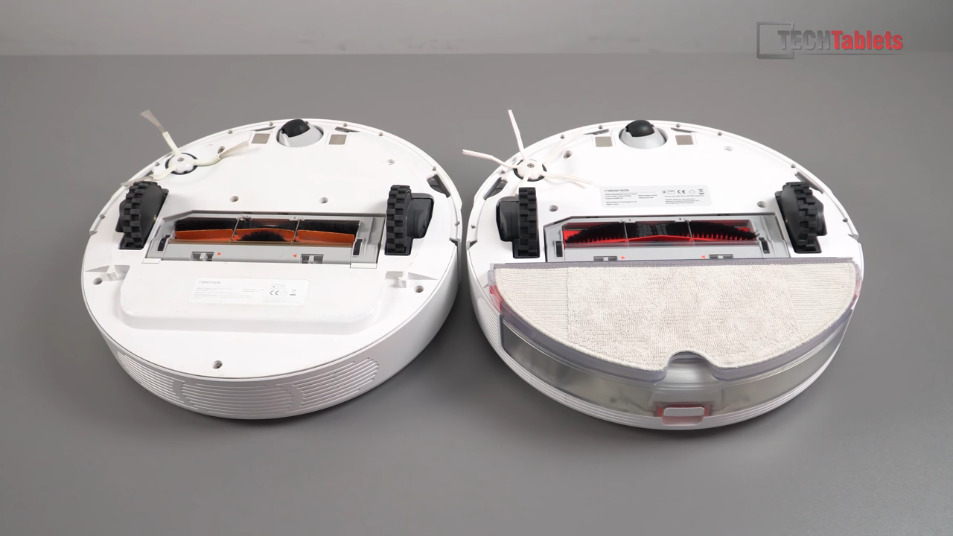 The S5 Max and S6 both come with a primary brushroll that features intertwined bristles and rubber blades. They work alongside side sweeping brushes. This cleaning head can pick up both long and short pet hair without tangling. 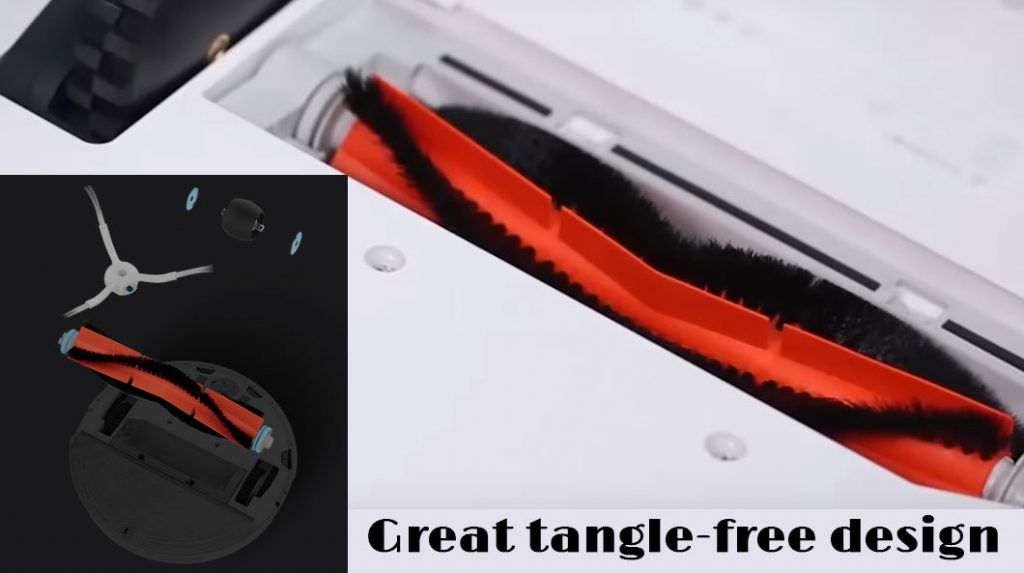 The Roborock vacuums come with a powerful NIDEC brushless motor that generate up to 2000pa.

If you are looking for a robot vacuum for carpets and pet hair, any of the four Roborock vacuums should be on your wish list.

No model has the upper edge when it comes to carpet vacuum – that’s at least in terms of vacuuming. Worth mentioning is the power modes available, which allow for customized cleaning.

The S5 Max and S6 come with Quiet, Balanced, Turbo, and Max mode. 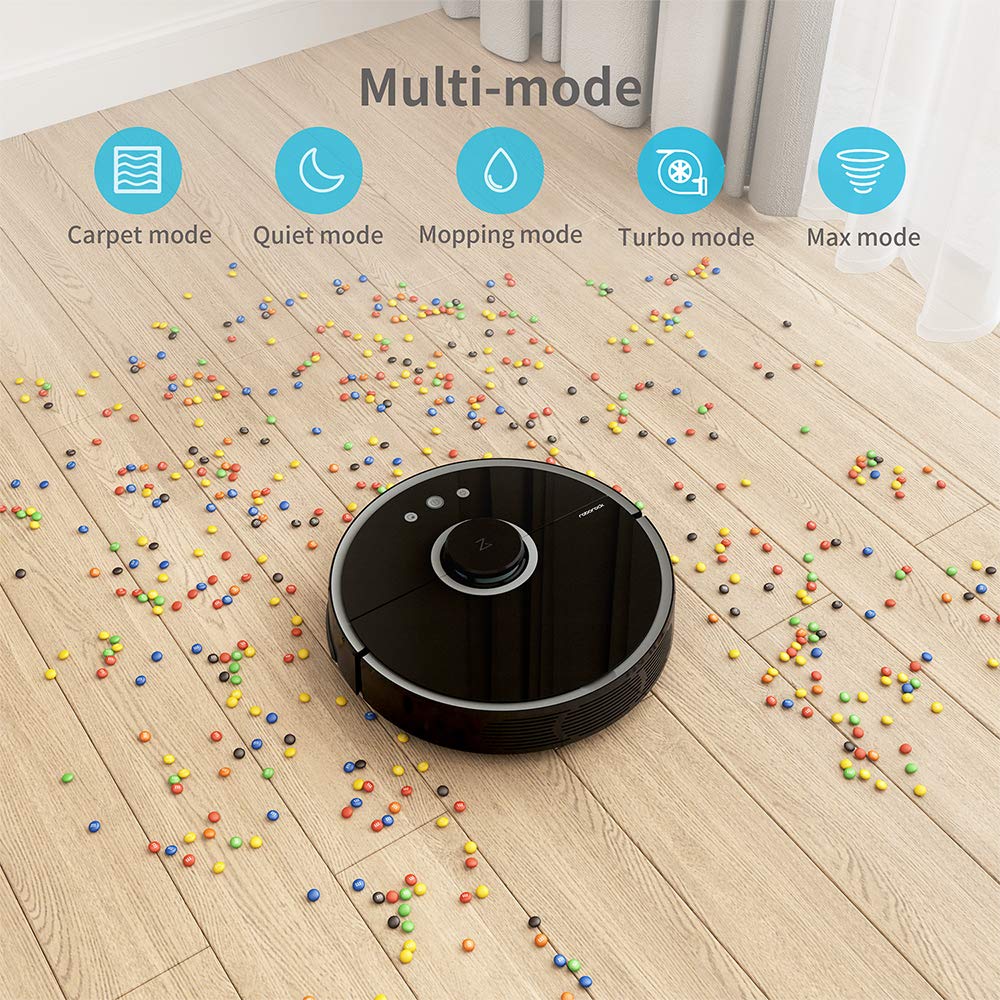 The only difference we noted between the two models is the operation noise.
The Roborock S6 was noticeably quieter compared to the S5 and S5 Max.

The Roborock S6 and S5 Max share most of the features here. Both have Washable E11 Air filters, and even though they are 99% efficient, they are not ultimately the best for allergy sufferers.

We expected Roborock to use true HEPA filters in these two models as they filter down to 0.3 microns. That means even the tiniest allergens won’t escape.

Regarding the maintenance, you will have to wash these filters frequently as they get clogged fast, and consequently, affect suction. 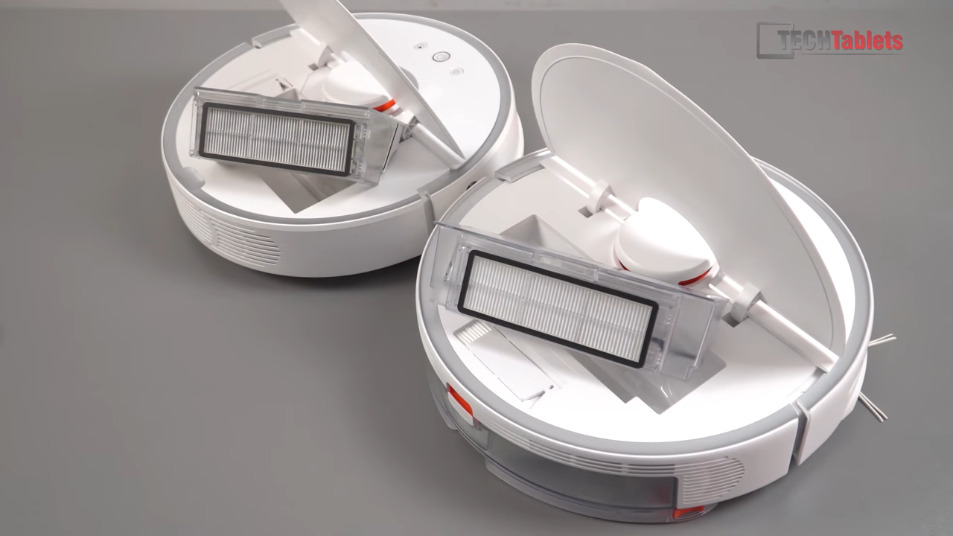 Next up is the bin capacity, and this is where there’s a difference between Roborock S6 and the new S5 Max. While both bins are washable, the S6 has a larger bin, 0.48L to be precise, and the S5 Max has a slightly smaller bin, with a 0.46L capacity. The S5 Max had to have a reduced bin to accommodate a larger water tank.

When it comes to mopping, the battle here is between the high-end Roborock S6 vs. the updated S5 Max.

While both models have the wet and dry mopping function, several extras make the S5 Max the best choice. 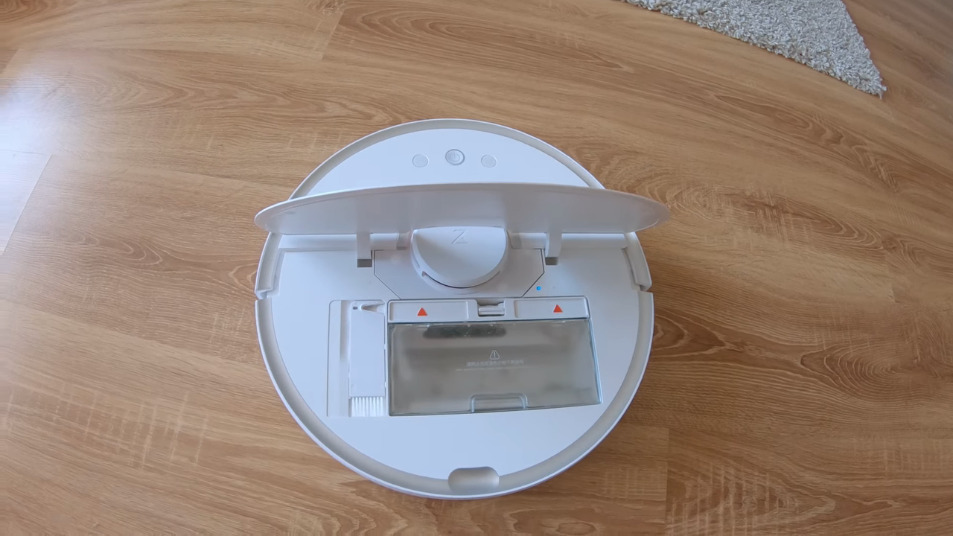 The Roborock S5 Max tags along with a larger 0.29L water tank, which is better than the S6’s 0.14L tank. But the best thing is that water control is possible via the mobile app, unlike the S6, where water control is manual, on the robot vacuum itself. 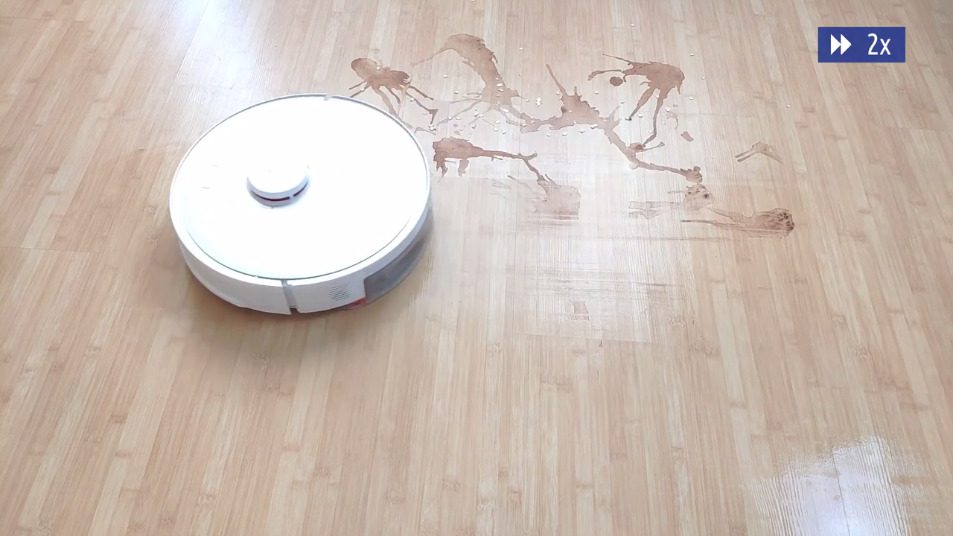 Another thing that makes the S5 a better robot mop is the No Mop Areas feature, which enables the unit to differentiate carpeted areas and bare floors. This solves one of the biggest problems of the S5 and S6 – mopping carpets.

As usual, we put all the robot vacuums we review under stringent tests to find out which one performs best in a real-life situation.

To give readers a glimpse of the performance, we used the common household dirt like Cheerios and dog messes on bare floors and carpets. Below are the results. 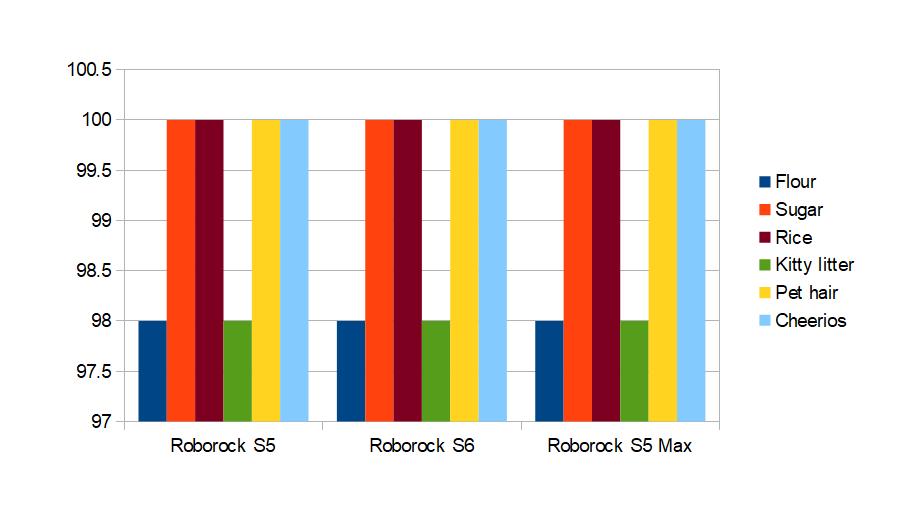 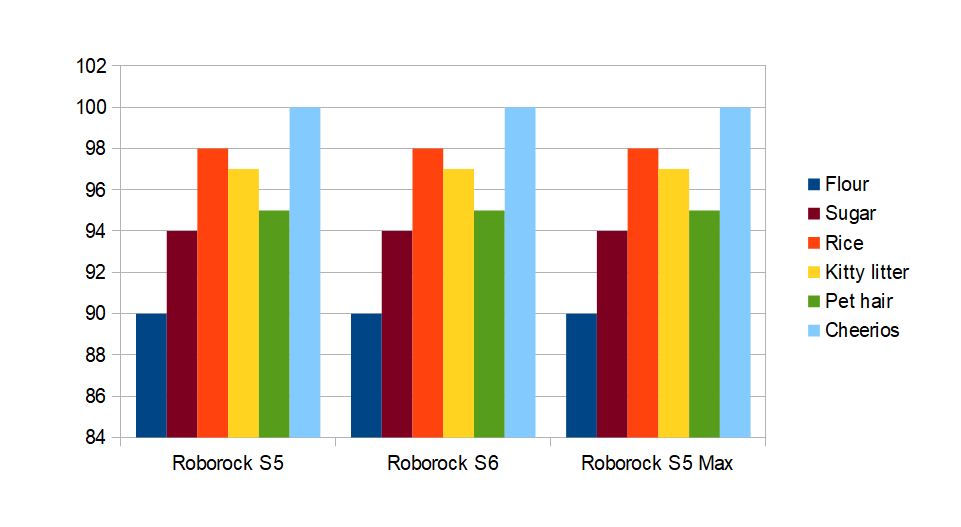 The battery of your robot vacuum determines how long it will run, and consequently, the area it will cover. Much has been retained in these Roborock vacuums.

When it comes to power management, they have auto-recharge and auto-resume functions, making them suitable for large apartments.

But then, there’s an extra which the S5 Max comes with. This model has intelligent charging which recharges just enough to complete the task. Perhaps this feature will be made standard for all the Roborock vacuums via the wireless updates, but as of now, it’s available on the S5 Max only.

The Roborock S6 comes with the LDS Laser Navigation, which uses obstacle detection sensors and drop detection to prevent falls on the stairs. In low to medium traffic apartments, the S6 does a great job. There is nothing different when it comes to the new S5 Max as far as navigation is concerned. 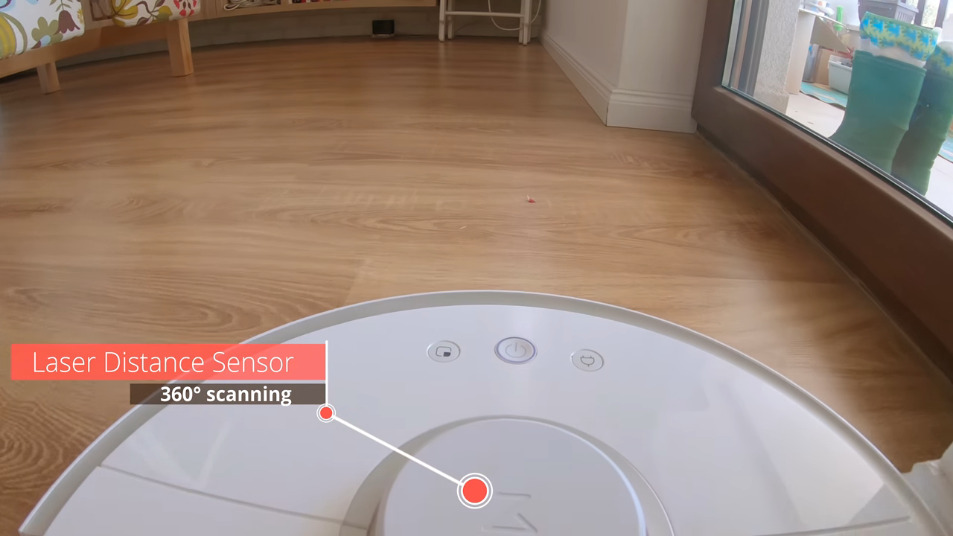 But when it comes to floor mapping, the new S5 Max is the best choice. Both vacuums use a SLAM navigation algorithm, but the new S5 Max is more intelligent. It features high precision maps that scan and map your entire house accurately. The best features the S5 Max adds is the No Mop Zones, a feature which detects carpets so your Roborock won’t be mopping the carpets like the S5 and S5. 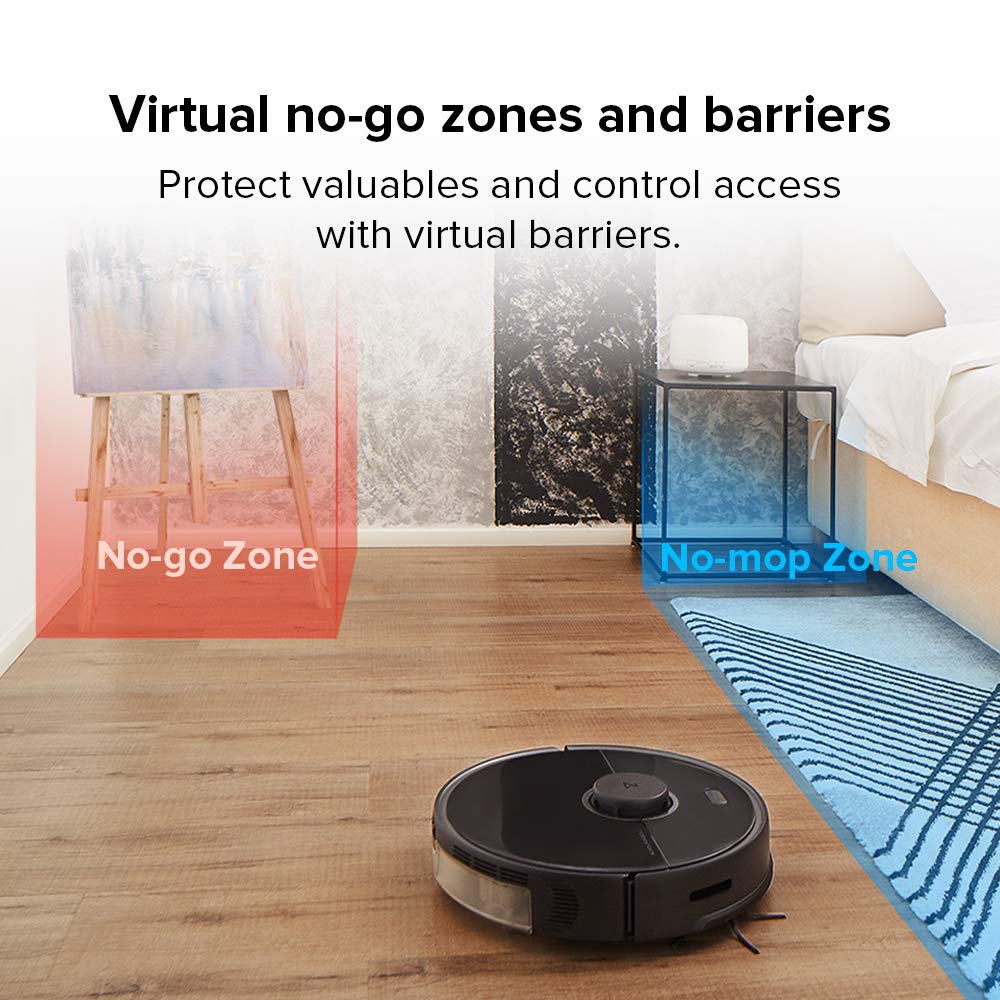 As for boundary marking, we are glad both the S5 Max and S6 have digital barriers. Just draw the limits on the floor planner, and that’s it – no magnetic strips or Virtual Walls nodes.

All the Roborock vacuums are smart home ready. So, if you want mobile operation and Alexa compatibility, this Chinese brand has got you covered. They all come with 2.4GHz Wi-Fi and can be operated from the Xiaomi app. But then, there is a slight difference when it comes to the mobile app features. 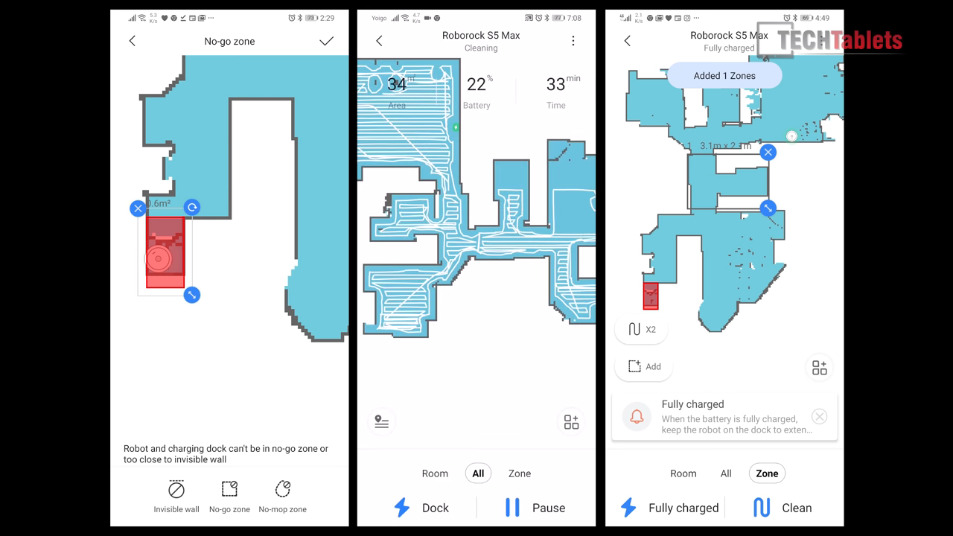 The new Roborock S5 Max has a water control adjustment on the mobile app. Remember, the S6 has its controls on the water tank, which makes mopping quite stressful. Otherwise, all the other features, including reports, realtime robot location, Over-The-Air Upgrades, are standard in both vacuums.

Now, we have come to the end of this Roborock comparison review. It’s time to decide which is the best choice in this Roborock S4 vs. S5 vs. S6 vs. S5 Max battle.

The battle here is between the Roborock S6 vs S5 Max and the upgrade to the original Roborock is the winner for several reasons. 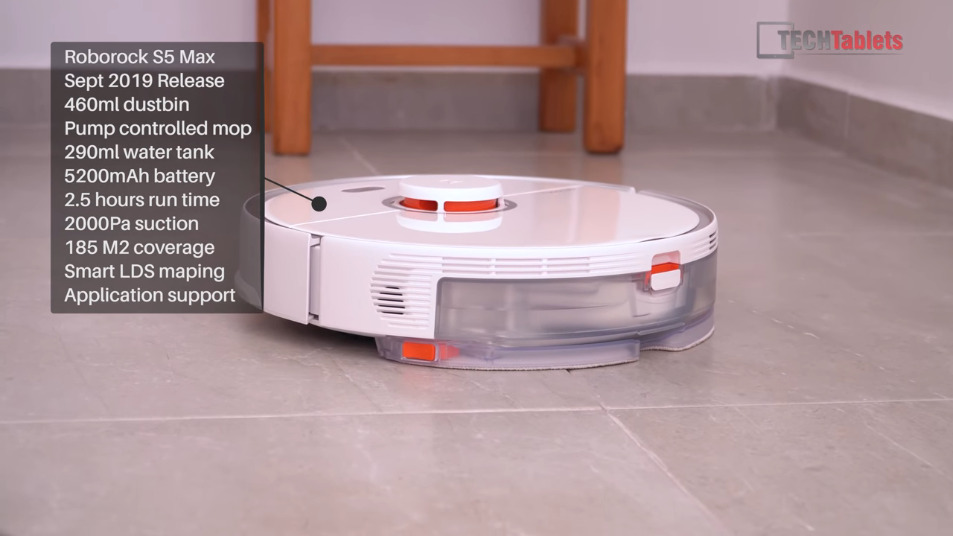 Make sure to subscribe to our price drop alerts, and we’ll ping you whenever there are Roborock discounts.

I am a tech enthusiast with a flair for home robotics and Smart Home technology. If I’m not in my office, you will find me testing gadgets and writing reviews. I also like fishing and mountaineering. When I was buying my first robot cleaner, I had a hard time making a choice on what to go for because there was very little information about them. For that reason, I decided to start this blog to help other customers choose the best Home Gadgets.
Best Roomba Vacuums For Hardwood Floors Miele Classic C1 vs. Compact C1 vs. Compact C2